*CUT TO THE CHASE*

NOTE: This spoiler was submitted by Alex

Suffolk, England, 1939. Self-taught archaeologist Basil Brown (Ralph Fiennes) arrives at the massive estate of Edith Pretty (Carey Mulligan). She tasks him with investigating and excavating the burial grounds of the estate, which have large mounds. Edith offers him the same salary he receives at his museum job, but he declines, saying it’s not enough. He meets Edith’s young son, Robert (Archie Banes), and leaves the estate. As he bikes away, he receives a new offer from Edith’s chauffeur and tells him he will begin on Monday. He thinks the mound Edith wants to start with is unlikely to have anything in it, so he starts with the one he believes with prove most fruitful.

Robert begins assisting Brown. Visitors from Ipswitch Museum, Brown’s former employer, come to see the dig. They seem unamused with this seemingly unimportant project, and they ask Edith to “return Mr. Brown” to work on their new Roman villa. Brown believes the burial grounds are Anglo-Saxon, not Viking as he first suspected. Edith gives him permission to choose which job he wants to go with, and he opts to continue working on the burial mounds, despite his co-workers insisting they will match his new salary. Edith, meanwhile, is mourning her husband, and when walking home one day finds herself in pain and out of breath. Her doctor tells her she needs to not worry so much.

One day, Edith and Brown are discussing archeology when the dig site, which does not yet have supports in place, caves in on him. Edith and everyone working at the estate come together to dig him out, though he is injured badly. Edith performs CPR and Brown is eventually resuscitated. Afterward, Edith asks him if he saw anything while he was near death, and Brown says he thought of his grandfather. He rushes back out to the site, where he theorizes he may have been wrong about the mound that Edith had initially picked for him to dig.

Brown learns from others at the estate how Edith spent thirteen years caring for her ailing father, turning down her husband’s proposal every year until her father had passed away to care for him. Then, a year after Robert was born, her husband died as well. Meanwhile, Brown discovers iron rivets at the dig site, a huge indicator of something big. He uncovers a ship inside the mound, indicating it is a burial site of someone very important, a warrior or king. Edith and Robert are amazed at what they are seeing, and Brown congratulates Edith on being correct about the mound and tells Robert he couldn’t have done it without him. 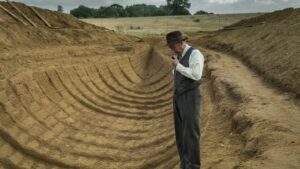 With this discovery, the men from Ipswitch Museum return wanting to take over the dig, but Edith turns them down, leaving it to Mr. Brown. She knows he will need additional hands, and since he turned down the museum men, she invites her cousin Rory Lomax (Johnny Flynn) to assist. She thanks him for allowing Robert to participate, and invites him to have dinner with her. When he arrives to his quarters, he is shocked to see his wife May (Monica Dolan). She says she told him she was coming in her letters, none of which Brown has opened. Because May is there, he spends the evening with her and is forced to cancel on the dinner Edith had planned for him. Meanwhile, World War II is looming across the country.

Edith learns that she has irreparable heart damage from rheumatic fever she had as a child, and that another attack is not far off, possibly even a fatal one. Men from the National Museum arrive at the dig site against Edith’s wishes, determined to take part in the dig, which they now suspect to be monumental. Charles Phillips (Ken Stott) tells Brown that this is a dig of national interest and the National Museum will be taking over by order of the ministry of works, and that Brown’s services will no longer be needed. Brown says he was hired by Edith, not them. Brown rushes to inform Edith that there appears to be a burial chamber in the ship, and asks what she wants to do. Edith is still reeling from the news of her health and sadly tells Brown there’s nothing she can do. He urges her to stand up to them.

Edith tells Phillips she wants to keep Brown on, and Phillips begins dictating to Brown his extremely meticulous and demeaning orders, clearly beneath what Brown is capable of, forbidding Brown and Rory from even entering the ship. Phillips sees Brown as an amateur unworthy of the project. Brown leaves, believing he will not get any credit for the discovery, saying goodbye to Robert. Robert chases after him on his bike. At his home, May encourages him to go back, and Robert arrives to their shock, telling Brown he promised him. Edith and Rory arrive to pick up Robert, and Brown tells them he will return to the dig.

Phillips brings in husband and wife Peggy and Stuart Piggott (Lily James and Ben Chaplin) to assist. Peggy is disappointed to realize Phillips didn’t read her work and only asked for her to join the dig because she is light and can excavate the lightest areas. Later, Peggy steps through a piece of the dig site. Edith and she begin talking, and when Peggy explains she doesn’t have suitable clothes since they came straight from their vacation, and Edith loans her some of hers. When rain causes the dig to lose a day’s work, Edith tells Phillips he is wasting Mr. Brown’s talents. He says Brown isn’t qualified, and Edith says that’s just snobbery – Phillips puts Brown to work.

The marriage between Stuart and Peggy seems strained, with Peggy trying to have intimate moments with Stuart and Peggy constantly avoiding her. One morning, she leaves for the dig without him, and he grumbles that he seems late. It becomes clear that Stuart is secretly gay when he begins flirting with another man on the site. Peggy locates and discovers the first distinctly Anglo-Saxon piece, and Brown finds an ancient coin that confirms what Brown had suspected from the beginning. Phillips wants to deliver the artifacts to London, but Edith notes that war is incoming, and directs Brown to take it to the house, confounding Phillips.

Peggy and Rory begin spending time together. Later, Stuart tells Peggy he is taking some of the artifacts away with the other man from the dig, and awkwardly tells Peggy to stay and work on the dig. Edith then invites Peggy to stay in the house, where they all learn Rory has been accepted into the Royal Air Force. Public interest in the ship increases and Edith invites the public to come see the discovery, frustrating Phillips. Just then, an Air Force plane crashes into the nearby water. Edith tells everyone not to swim because the current is so fierce, but Rory dives into the water and manages to pull the pilot out of the wreckage, but the pilot does not survive. Peggy and Rory share a near-kiss, but Peggy says she can’t.

Meanwhile, Robert asks Edith if Rory will die like the pilot. When Peggy returns to the house, she finds Edith having a medical episode. Robert discovers and runs off into the night, upset, and runs into Brown. Robert sobs to Brown that he is failing to look after his mother and he doesn’t understand why he can’t help her. Brown helps tell Robert to be strong and brings him inside. Meanwhile, on his own, Phillips wonders who will be the rightful owner of the treasures discovered at the site. Rory receives his orders to report and Edith tells him he cannot die, that Robert will need him. Stuart returns with flowers for Peggy and runs into Rory, and then Peggy, who realizes Rory has been called to war.

Many people come out to view the discovery, and a celebratory party is held at the estate. Edith proudly tells the gathered masses that Brown is responsible for the discovery. The inquest into the artifacts determines that Edith is the rightful owner of all the artifacts, and Edith begins to cry. Brown thought she would be pleased, and Edith sadly says that they all die and decay. Brown says they are all part of something that lives on. Peggy looks at the photos of the dig taken by Rory and cries, and Edith consoles her. Phillips asks Brown what Edith’s intentions for the treasure are as various museums begin jockeying to be the ones to receive the artifacts, and wonders how much money she will ask for them. Edith asks May if Robert can come to visit the Browns from time to time, and she agrees. Peggy tells Stuart he isn’t happy with her and ends their relationship.

Edith tells Brown she is giving the treasure to the British Museum, as a gift. As a condition of the donation, she insists that Brown’s work be given proper recognition. Peggy throws her wedding ring away and goes to Rory’s campsite and finds him there – they sleep together. Stuart is implied to consummate his own relationship with his male colleague. On the night before the dig site is to be filled, Robert, Edith, and Brown sleep out in the site under the stars. Shortly after, war is officially declared. Later, Robert, alone, waves goodbye to Brown.

The post-script says that the treasure was safely hidden underground during the war, and was shown to the public nine years after Edith’s death. Basil Brown’s name was not mentioned – only in recent years has Brown’s true contribution been honored, with his name listed next to Edith’s in the museum’s permanent display.

*CUT TO THE CHASE*
Brought to you by

Widowed Edith Pretty (Carey Mulligan) hires self-taught excavator Basil Brown (Ralph Fiennes) to excavate the burial mounds on the grounds of her massive property. Though he is not taken seriously by the scientific community, when he eventually makes a huge discovery the excavation gets taken over by British order led by Charles Phillips. Phillips brings in husband and wife Peggy and Stuart Piggott (Lily James and Ben Chaplin), who are having problems in their marriage because Stuart is secretly gay. Edith learns she is dying, and supports Brown in his efforts. The dig ends up turning up massive discoveries and ancient artifacts, which Edith agrees to donate to the British Museum only if Brown is credited. Peggy leaves Stuart and falls in love with Edith's cousin Rory (Johnny Flynn) who is leaving to join the Royal Air Force. Edith dies shortly after. Post-script says that only in recent years have Brown's contributions been credited, and now his and Edith's names are both displayed in the British Museum.