*CUT TO THE CHASE*

NOTE: This spoiler was submitted by Jeremy

Los Angeles, October 1990 – A young woman named Tina Salvatore (Sofia Vassilieva) is driving by herself when a car with an unseen driver comes close to her. The driver goes past her and stops at a stop sign waiting for her. Tina drives past and keeps going. Fearing she is being followed, she stops at a nearby gas station to get help, but the place seems empty. The driver then stops at the same place and gets some items from the trunk. Tina runs and hides from the man until she sees a truck coming up on the road. She stops in the middle and gets the truck driver to stop for her.

The following day, Kern County Sheriff Joe “Deke” Deacon (Denzel Washington) is responding to a complaint from a shop owner whose neon sign keeps getting damaged. Deke was a former detective who suffered a breakdown after a specific case years earlier, and he now lives alone. He is placed with young hotshot lead detective Jimmy Baxter (Rami Malek) as they gather evidence related to a recent murder case, which may be connected to a series of other murders involving prostitutes.

Deke and Jimmy join other authorities, including Jimmy’s partner Detective Jamie Estrada (Natalie Morales), to the apartment of the most recent victim, Julie Brock (Tiffany Gonzalez). She is found stabbed and bound, and there is evidence to indicate that the killer came back to the crime scene and moved the body. Deke is met by the coroner, Flo Dunigan (Michael Hyatt), who knows Deke from way back and knows of his history. Across the street from the building, Deke finds an observation point overlooking the apartment. He notices the killer’s modus operandi is similar to the case that haunted him, wherein he discovered two victims nude and bound with bags over their heads.

Later that night, a woman named Ronda Rathbun (Maya Kazan) is finishing an evening jog with a friend before they part ways. A brown car similar to the one that followed Tina starts to follow Ronda. She is immediately reported missing the following day.

Jimmy brings Deke in when they apprehend a suspect, Stan Peters (Frederick Koehler), who became a registered sex offender after he was caught urinating in public. When Jimmy shows Stan a photo of Julie, Stan breaks down in tears. Jimmy then brings up the name of another victim, Mary Roberts (Anna McKitrick), and Stan stands from his seat as if he knows that Deke is on the other side of the mirror.

Deke then goes to Flo to learn anything on Julie. It is determined that she had roast beef in her stomach that was partially digested, but she was known to follow a strict vegan diet. Deke and Flo then go share a meal together, where Flo brings up an incident related to Deke’s infamous case, and she keeps a keychain with a fired bullet on her person. Deke later returns to Julie’s apartment to keep investigating, and he speaks to the landlady after she checks on him.

Deke later rents out a room at a seedy hotel in the area with prostitutes occupying the street outside. He continues to keep files on the victims from the old case, and he sees images of the victims coming alive, but especially Mary Roberts.

Jimmy learns from Captain Carl Farris (Terry Kinney) that Deke’s obsession with his previous case caused him to have a breakdown, resulting in a heart attack, a divorce, and triple bypass surgery. Jimmy later meets with Ronda’s parents to try and find her. They provide some help by saying that she was usually seen with a red barrette in her hair.

Authorities later find another woman’s body underneath a bridge, but Jimmy confirms that it’s not Ronda’s body. They learn that the victim was a prostitute, like most of the other victims. Deke and Jimmy step aside, where Jimmy tells Deke that Stan committed suicide the night before.

After having a meal with Jimmy’s family, Deke goes to visit his ex-wife Marsha (Judith Scott). He later rejoins Jimmy at a bar as they go over the facts that they have learned in relation to their investigation of the murders. Deke also takes Jimmy by the site of the previous case, even showing him the location where the bodies were found.

In Deke’s continued investigation, he finds a suspect in Albert Sparma (Jared Leto), a worker at a repair shop that stands in close proximity to the murders.

Albert also happens to drive a car similar to the one that the killer had been seen driving.

Deke follows Albert through the day and notices him doing things like picking up a prostitute. Albert soon notices Deke following him and drives past him at one point asking a question Deke asked when they first met (“How’s the trunk space?”). 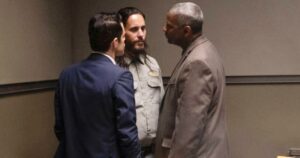 Albert is later brought in for questioning to the precinct. Tina also happens to be there to report the stalking incident from earlier. She sees Albert and appears to recognize him, but when Jimmy and Jamie show her photos of recent perps, she cannot seem to properly identify Albert as the man who stalked her. Jimmy talks to Albert, who admits to having a fascination with serial killers and crimes such as this, even appearing to get aroused at some of the crime scene photos. Deke enters the room and forcibly grabs Albert, shoving him against the wall, which cuts the interrogation short.

Jimmy talks to Farris again and learns that Albert had falsely confessed to a murder eight years prior, so anything he says is unreliable. He goes to Deke’s hotel room and is disturbed by his documents on the previous case, but still asks for his help in trying to nail Albert. They go to his apartment to do a search when he is gone but they have to flee when other cops from that jurisdiction show up.

The next night, Jimmy catches Albert on his own, and the man tells him he can lead Jimmy to where he allegedly hid Ronda’s body, while Deacon follows. Jimmy is led to the desert where Albert starts messing with him by giving him conflicting locations to the body. Eventually, Albert says he never killed anyone and is just wasting Jimmy’s time. As Jimmy keeps digging, Albert taunts him by mentioning his wife and daughters, calling him a bad detective who can’t protect his family. Jimmy snaps and whacks Albert across the head with the shovel, killing him. He sits in shock over what he’s done as Deke comes to help him. Another flashback reveals what went down the night of Deke’s case – after finding two victims, Deke heard a noise in the bushes and fired a shot, thinking the killer was about to emerge. It was really Mary Roberts, who had survived but was accidentally shot and killed. Farris and Flo covered it up by saying that Mary had been stabbed to death. Deke then has Jimmy dig and fill multiple holes before burying Albert in one of them. All the while, Jimmy tries to convince himself and Deke that Albert really was their guy.

Deke proceeds to gather any and all evidence from Albert’s apartment and proceeds to burn it. Jimmy sits outside in the backyard while his daughters play, but they and his wife notice he is not feeling right. Someone from the precinct stops by to give Jimmy an envelope. It’s from Deke, with a message that reads “No Angels”, along with a red barrette, leading Jimmy to think that Deke has found the evidence they need to incriminate Albert. In reality, Deke just bought that barrette with a pack to put Jimmy’s mind at ease, and he continues to burn Albert’s evidence to, in one way, put this case to rest.

*CUT TO THE CHASE*
Brought to you by

In 1990, Los Angeles is terrorized by a serial killer targeting young women, specifically prostitutes. Sheriff Joe "Deke" Deacon is paired with young hotshot lead detective Jimmy Baxter to catch the killer. Deke is still haunted from a previous unsolved case from when he worked as a detective, which caused him to have a breakdown and be demoted. Jimmy becomes equally obsessed with the current case when a young woman named Ronda Rathbun goes missing.

The pair find a suspect in Albert Sparma, a repair shop worker who drives a car similar to the one the killer had been seen with. After bringing Albert in for questioning, he exhibits traits fitting the profile of a serial killer, but he is nothing more than a creepy guy fascinated with serial killers.

Jimmy tries to catch Albert after failing to get evidence from his apartment, and Albert says he will lead Jimmy to where he buried Ronda's body. After wasting his time, Albert says he never killed anyone, but after he taunts Jimmy too much, Jimmy snaps and kills him with a shovel. Deke arrives to help Jimmy get rid of Albert's body, and it is revealed that the earlier case haunted Deke so much because he had accidentally shot and killed one of the surviving victims when he thought that the killer was attacking, and his colleagues helped cover it up. Similarly, Deke is helping Jimmy cover up his own murder.

Deke burns all evidence from Albert's place and sends Jimmy a red barrette to make him think that it's the one that belonged to Ronda (her parents described it to Jimmy as one of her belongings) to give him closure to the cases, even though they remain unsolved.